As mentioned in the previous post, with all those thoughts from “Hit Refresh” fresh in my mind, I just fully immersed myself into the event for the next two days. The keynote speeches, the HoloLens demo, Virtual reality demo, classroom sessions on various topics ranging from AI, Quantum computing to Augmented reality, PowerApps etc. were just amazing and fantabulous.

For me personally, one of the major highlights was the mixed and augmented reality demo I had wearing the HoloLens and experiencing first hand what I had read so far on the topic of MR and AR. The demo was about the remote assistance, where the supervisor is guiding the field technician from his office. I was the technician in that demo and I got a chance to wear the HoloLens and perform the operation myself taking the cues from the HoloLens. With HoloLens on my head, I could see the skype window with supervisor’s face in it, on the left-hand side and the instruction steps on the right-hand side. The actual circuit on which I had to perform the operation was in front of me. The supervisor, on the other hand, was seeing exactly what I was seeing in front of me from the HoloLens. The supervisor then used pointers, highlighters on his Surface Pro, to guide me with what I need to do with the circuit that I need to fix. Whatever he was highlighting, I was able to see it overlayed on the actual circuit and based on his inputs and guidance I was able to perform my job. This was an amazing experience as I got to believe in what I have been reading so far on this topic.

I was already in awe with this experience and before that effect could fade away, I experienced one more mind-boggling facet of the unbelievable HoloLens technology and that was more around mixed reality. By the way, just one clarification, before this event I used to interchangeably use the words ‘Augmented reality’ and ‘Mixed reality’ and I used to think they are the same. But in this event, I got to exactly know and experience the difference between the two. The difference is as below:

Just to complete the spectrum, I am mentioning the definition of VR as well below:

The first part of the demo involving the remote assistance was all about the augmented reality, where the real circuit was superimposed by the objects, animations that were guiding me to perform my job better. However the second part of the demo was about the mixed reality and that just blew my mind, literally. Long story short, there was a small part of a long turbine physically there in front of us, which I needed to repair but when I wore the HoloLens, the entire turbine was visible to me as if it was real, though it was not there physically. This technology not only superimposed the digital objects on the part of the physical machine that was there but also integrated the digital view of the remaining machine, which was not there, into the physical part of the machine, which was there. Ideally Mixed reality = Augmented reality + Virtual reality. On the HoloLens, I was able to see the entire turbine along with the computer-guided instructions to repair it, with all the hologram seen clearly from the Hololens. I was literally moving all the screens in front of me by doing all the birdy dance with my thumb and the index finger with the help of HoloLens, in the air and performing my actions on the turbine, just like the way Tom Cruise moved it in the movie ‘Minority report’. I would never forget this experience.

Other notable experience was the Virtual reality experience, as mentioned above, which was about experiencing the house even before it is built from the inside out. That experience too was mind-blowing as virtual reality would allow you to feel the end product virtually before it manifests into reality. 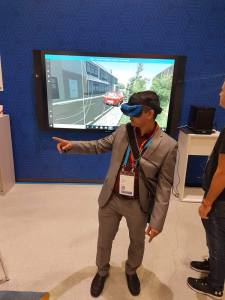 Another notable stall was of SAP, where they were demoing the SAP HANA One Demand product. It was too good to see the Artificial Intelligence embedded in their product and what it could do with the help of IoT (Internet of things). The reporting capabilities and the AI around it too were superb to watch. Just to illustrate more on it, the presenter dragged the excel sheet with some sales data into the reporting application screen. Once the excel sheet was dragged and absorbed by the system, with AI and machine learning capabilities system itself first determined the type of data that was presented to it and then decided the best possible way to display it in the form of the visual report. This was similar to PowerBI but something even more than that. Having said that PowerBI too have AI capabilities when the user asks “Show me the sales for this quarter?” and the system displays that correctly.

Empowering a Modern Workspace with AI

This reminds me of one of the notable classroom sessions that I attended about AI and that was “Empowering a Modern Workspace with AI”. The speaker there gave very relatable examples about AI and that was really good. It was mentioned that there are three layers to AI and they are ‘Pattern recognition’, the middle layer is ‘Perception’, sensing more and more complex scenes and the final layer being ‘Cognition’, deep understanding of human language. The session again underlined the fact that though AI is in its nascent stages, everything around technology is ultimately moving in that direction only.

Apart from all this, there was one more session that I kind of did not understand fully but conceptually got what speaker was saying and that was about quantum computing. I understood the analogy of linear computing finding the way in the maze by trying one possibility at a time but quantum computing doing all the possibilities all at once to arrive at the correct answer and that too in no time. One more concept of a molecule present at two different places at the same time at a sub-atomic level, quite didn’t make sense to me, though I could relate to that concept spiritually as this same phenomenon is mentioned many times in ‘Autobiography of a Yogi’ (Steve Jobs’s most favourite book. This book is an autobiography of an Indian guru Swami Yogananda). Other than that I didn’t understand much but the benefit of that session was it left me hungry to know more into that topic, which is supposed to be the future technology trend. I actually then searched on youtube about it and found very informative Microsoft videos called ‘Explanimators’. You can watch them here.

Other key highlights of the event were, interview of the great actor Sir Michael Caine CBE, speech by the famous scientist and broadcaster Dr Maggie Aderin-Pocock MBE, keynote speech by Satya Nadella and the famous author and sportsperson Matthew Syed. All the above 4 speeches were amazing and of great value.

Sir Michael Caine CBE spoke about being honest, truthful and full of integrity with whatever you love to do and perform and pursue it with full passion and hard-work. It was an experience in itself to hear from the legendary artist. 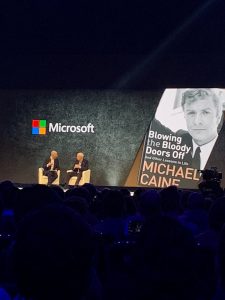 Scientist and broadcaster Dr Maggie Aderin-Pocock MBE is an amazing orator. She just left everyone in the auditorium spellbound with her passionate and inspiring speech about having a crazy dream and having a fire in the belly to go after it and achieve it. The way she presented herself on stage, telling her whole life story and her achievements, no one would believe that she was dyslexic as a child and had to change 13 schools to complete initial education. That was truly amazing and inspiring. 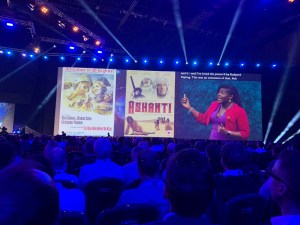 Satya Nadella’s speech was the ultimate speech as he touched upon many different topics around the emerging technologies and how ‘Intelligent cloud’ and ‘Intelligent edge’ is going to shape, transform and disrupt the future in more productive and positive manner. He also spoke more on AI as this the ultimate aim where everything is driving to. 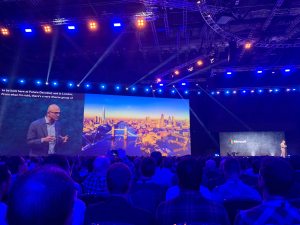 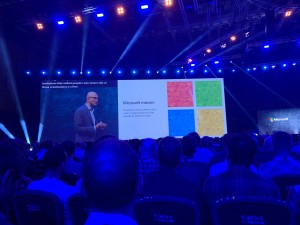 Finally, the talk delivered by Matthew Syed was also an engaging and enlightening one. The one statement that he made in this entire speech struck a special chord in me and that was about humility and confidence. Matthew made a very subtle but valid point about it. He said a person should have confidence in execution but humility while evaluation and not the other way around. 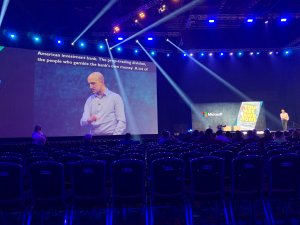 All in all those two days were full of amazement and enjoyment of having seen, experienced, listened to something that is truly incredible, promising and exciting all the at the same time. Along with me many of my office colleagues were with me at the event.

Lucy, Dan, I, Chris and Will

Just before I end, would like to inform the readers about the Microsoft Ignite event happening on 26th and 27th of February 2019. This event is happening at the same fantastic venue, Excel London and the most important thing, it is free and registrations are open, so hurry up!!!

Whats up friends! Its time for my Microsoft Ignite 2019 Recap video!!…

What’s up friends! Wow it has been one heck of a year…

What a timing I must say, I just finished reading “Hit Refresh”…